God Became Man so that Mary Might Become God

Salvation in the east is conceptualised in terms of theosis. In the west this concept is often referred to by the term “divinization”, but it is eastern Christendom which has most fully developed the idea. Theosis is neatly summed up by a couplet attributed to many of the church fathers: “God became man so that man might become God”. To protestant ears this sounds blasphemous, but it is a quote with a lot of truth to it. Salvation consists of becoming God. However theologians are careful to emphasise that we become God by participation in the life of the Trinity, we do not become God by alteration of our nature. Similarly to how Christ had a totally divine nature and a totally human nature, we too will have both divine and human natures.

There are different levels of theosis, just as there are different levels of participation in the life of the Trinity. In Catholic theological lingo, your level of theosis is directly proportional to your level of justification. What does it mean to share in the life of the Trinity? It means that you share in the attributes of God! You share in God’s power, knowledge, presence, benevolence and so on. This is why we do not merely ask saints in heaven to intercede for us, we actually actively pray to them and petition them directly. This is appropriate, because the saints have a significant participation in the power of God. The saints are “little gods” by virtue of their participation in the one true God and we can petition them as such. Their wills are in perfect alignment with the will of God.

When you pray to Saint Anthony to help you find something you have lost, you are literally praying to Saint Anthony; you are not merely asking him to intercede for you (although that is happening too). Furthermore Saint Anthony takes an active role in the fulfilment of the prayer by virtue of the heavenly power and knowledge which he possesses via theosis.

Mary: A Fourth Member of the Trinity?

How does all of this apply to Mary? Well, Mary was the perfect creature; she never sinned; she had maximum Justification; she experienced a complete and total theosis. Mary does not merely participate in divinity, she participates in divinity perfectly. She does not merely share in God’s power, knowledge, presence and benevolence; she actually participates in these things so completely that she could be said to be omnipotent, omniscient, omnipresent, and omnibenevolent!

Mary participates in the life of the Trinity so closely that it is hard to distinguish between her and the other members. It is almost as if she is a fourth member of the Trinity by participation, without actually being a fourth member by nature. Mary’s will is so completely and perfectly aligned with the divine will and in submission to it that it is as if she does not possess a unique will of her own. 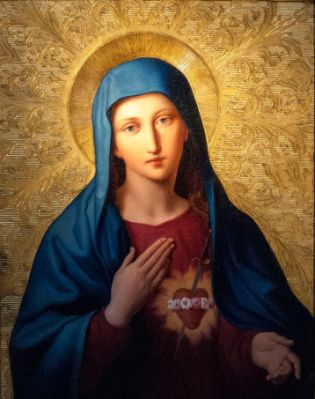 All of this can help to explain the doctrine of Mary as “Mediatrix of all graces”. Mary is a perfect mediator, because she perfectly shares in the mediation of Christ by virtue of her perfect theosis. What does this look like? It has two aspects: perfect intercession and distribution of grace.

In terms of intercession, because Mary’s will is perfectly in accordance with the will of God, she also prays in perfect accordance with the will of God. This implies that every grace that we receive has a prayer from Mary attached to it. Even something as simple as the sun rising day after day is associated with a prayer from Mary. Her prayer life is profound, exhaustive and ineffable. Mary prays for literally everything. The saints are similar: By virtue of the fact that their wills are aligned with God’s will and they share in his omniscience, they are able to intercede much more perfectly than us here on earth, although none as perfectly and exhaustively as Mary. This is why it is appropriate to ask for Mary and the Saints intercessions

The other aspect of Mary as Mediatrix is that she is a distributor of all grace by virtue of her participation in omnipotence. Mary shares perfectly in the power of God, and so wields his omnipotence simultaneously to God’s wielding of his own omnipotence. They are both agents who work together to send forth grace to us. The saints also have this honour, however their participation in theosis is less perfect, and so they are only mediators of some graces, whereas Mary participates in Christ’s mediation so perfectly that she is to be referred to as the mediatrix of all graces. Incidentally this is why we have patron saints for certain requests and issues: The church has identified certain saints as being mediators with respect to certain problems. Those saints share in God’s power in a real way, but they share most perfectly with respect to the issues that they are patrons for. Mary is the patron saint of everything, because she has been so perfectly divinized. 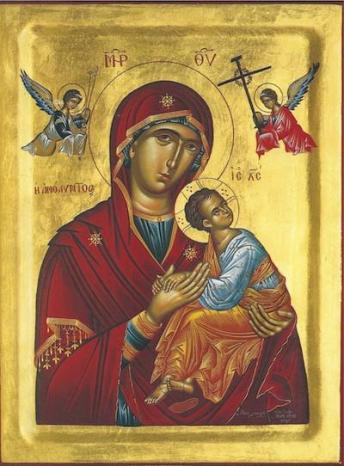 Pope Leo XIII referred to Mary as the “neck” which connects Christ the head to the rest of the body. While I can see value in this description insofar as it pictures all Grace flowing through both Christ and Mary, I think it is a dangerous image, as it seems to imply that Mary stands as “another mediator” between us and Christ. This is not the case. Mary is not “another mediator” between us and Christ, she is a “co-mediator” standing alongside Christ, and only mediates by virtue of her participation in Christ’s mediation. Mary mediates “in Christ”. She does not mediate “between us and Christ”. I prefer the idea of Mary standing alongside or within Christ and sharing in his mediation and dispensing of graces, by virtue of her perfect theosis and perichoresis. And it is the same situation with all the saints: all of the saints are indeed co-mediators, and co-dispensers of grace by virtue of their theosis – however they do not participate in mediation and dispensing as perfectly as Mary does.

Praise the most venerable Theotokos!

Johnny is a Bishop, Heretic, Prophet, Priest, Apostle and ASM (Ascended Spiritual Master). On his good days he is often also the one true almighty God incarnate. He enjoys writing theology and philosophy articles and spreading the Gospel promise of Universal Salvation